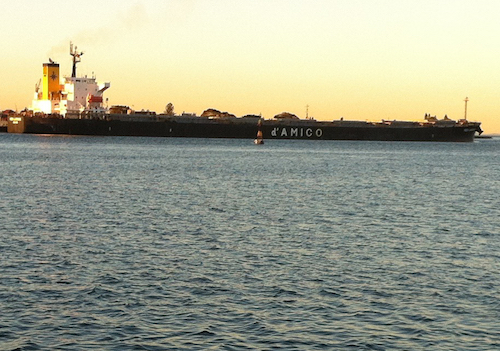 Bulk carrier leaving Newcastle Port with a load of CO2 in the form of coal.

Australia produces around 1.3% of the world’s greenhouse gases – not much, you would think, when you look at China, India or the USA.

But hang on. Italy, with twice the population of Australia’s produces 1.2% of the world’s greenhouse gases. The UK, with nearly three times the population, 1.4%.

So what’s going on here? Surely these guys just use nuclear to reduce their CO2? Not so. Italy closed all its nuclear plants in the 1990’s. The UK produces only 18% of its electricity from nuclear.

I’ve just visited the lovely city of Newcastle, via Singleton. What is unavoidable to the eye are the huge mullock heaps around gigantic holes in the ground; massive trains that are over a kilometer long; and ships the length of two or three football fields going in and out of the harbour, 3 or 4 a day, filled to the brim with that black gold that we rely on to prop up our budgets.

So the 1.3% is now looking more like 5-6 % (do the maths). Compare that with Italy, Germany, the UK and France combined, and there’s not much change left over. We are exporting our global warming to other countries.

“But, your honour, if we don’t sell it to them, others will. It won’t make any difference,” said the drug dealer to the judge.

No - we have lost all moral authority on this issue. We are, by far, the most recalcitrant greenhouse gas emitters, per capita, in the world.

The rotten tragedy is, we have some of the best renewable resources in the world and could go 100% renewable within 10-15 years - if we wanted to. If we told our political representatives what we wanted. If we voted them out if they didn’t deliver.

The big issue is not just global warming: it’s dollars. Where will governments get the money to run the country without the royalties from coal? Are they prepared to cut out subsidies to fossil fuels? Are they willing to bite the bullet and try some new sources of revenue – like getting corporations and individuals to pay their fair share of tax?